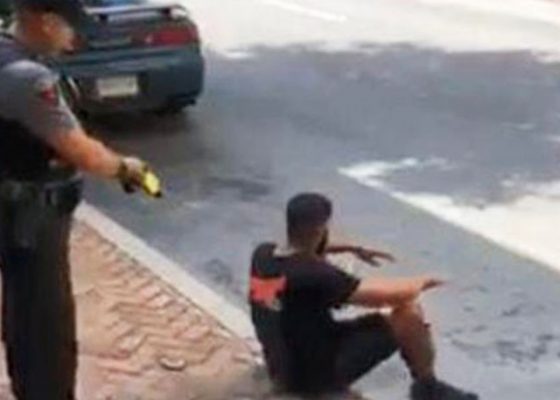 Lancaster, PA — Sean Williams, a 27-year old Black man from Lancaster, Pennsylvania says he feels traumatized after being hit by a stun gun fired by a police officer even though he was unarmed and already sitting down. He has filed a federal lawsuit, but the police officer who did that won’t be fired or suspended.

Lancaster Mayor Diane Sorace said that the officer who deployed a stun gun on a sitting, unarmed man has not violated any of the current policies regarding use of force. Therefore, he would not be suspended.

However, she said the policies are being updated and would only allow the use of stun gun when an officer is “faced with direct physical confrontation.” She added that she was upset by the video, noting that she was sorry for “the hurt, pain and turmoil this incident has caused for all involved.”

On June 28, police officers said they encountered Williams when they responded to disturbance complaints of a man allegedly confronting people with a bat. Though there was no bat found on the scene, they had to arrest Williams on an outstanding warrant on charges possession of a controlled substance and public drunkenness.

In a video captured by a bystander and posted on Facebook, Police Officer Philip Bernot can be seen telling Williams to sit on the curb and stick his legs out. After a while, Bernot used his stun gun on Williams while he was already sitting, facing away from the police.

Police said they warned Williams that they will use the stun gun if he refuses their demands. Bernot ultimately used the stun gun when Williams allegedly failed to follow their instructions. However, Williams said two police officers were giving him contradictory instructions about what to do with her legs, making him confused.

After the officer deployed the stun gun, Williams had hit his head on the ground. He said it caused him concussions, migraines, and pain in his neck and shoulder. He has now been going on physical therapy and seeing a psychologist.

Williams filed a federal lawsuit against Bernot and Lancaster Police Department Monday, saying they used excessive force and violated his civil rights. He is seeking over $75,000 in damages in the suit.

Brian Mildenberg, Williams’ attorney said it is “outrageous” that the officer involved won’t be suspended while the investigation is ongoing.