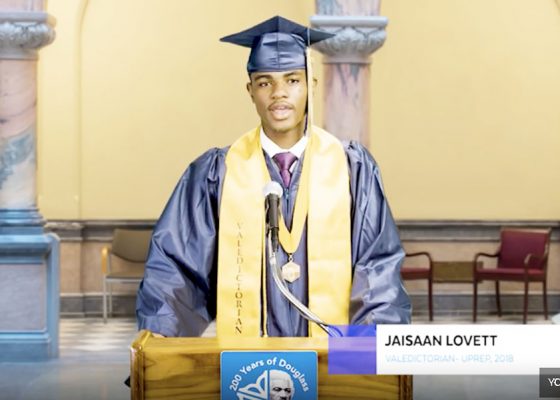 President and founder of University Preparatory Charter School for Young Men, Joseph Munno, denied Jaissan Lovett, the school’s first Black male valedictorian, the opportunity to speak at his graduation. Lovett was given no explanation but believes it was because he spoke up against Munno about issues at the school.

The school’s response: they wish “Jaision Lovett” (misspelled) well and will review policies. They also didn’t respond to the mayor’s office calling about it.

Thankfully, Rochester Mayor Lovely Warren invited Lovett, her former intern, to speak at Rochester City Hall, posted the speech on her Facebook page and called out the school’s leadership.

“It is easier to build strong children than it is to repair broken men,” Warren said, quoting Frederick Douglass.

Every valedictorian has given a speech at graduation at the 8-year-old school, except Lovett.

During Lovett’s six years at the school, he led a five-day student protest to advocate for better safety equipment in labs. He claims a lot of wrong things happen at UPrep, and he wasn’t afraid to say something. Lovett said Munno wasn’t receptive to that.

The school’s graduation rate is over 90 percent, but some reviews say that they don’t actually prepare students well enough for college. Students perform below average on state tests and take fewer advanced courses than state average, and the school has below average results in serving disadvantaged students.

Rochester, N.Y., has a majority population of color, with over 40 percent of it being Black, and the school’s population of students is 92 percent minority.

During his speech Lovett made a statement, seemingly directed at Munno: “I’m here as the UPrep 2018 valedictorian to tell you that you couldn’t break me. I’m still here, and I’m still here strong. And after all these years, all this anger I’ve had toward you and UPrep as a whole, I realized I had to let that go in order to better myself. And I forgive you for everything I held against you.”

Warren said in the video: “For some reason, his school — in a country where freedom of speech is a constitution right, and the city of Frederick Douglass — turned his moment of triumph into a time of sorrow and pain.”

Lovett received a full scholarship to attend Clark Atlanta University in the fall and will study video game design.