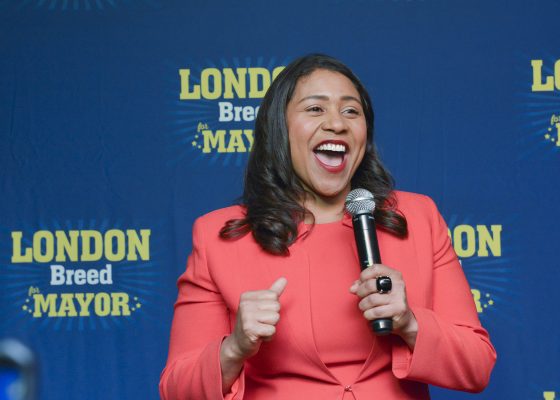 London Breed has made history, becoming the first African American woman elected mayor in San Francisco after her opponent conceded in what had been a razor-close race.

Breed, who had been appointed mayor last December following the death of Mayor Ed Lee, was forced out of the post after officials cited a conflict with her position on the city’s Board of Supervisors.

She defeated former State Senator Mark Leno in a close race that came down to 14,000 provisional ballots counted, over the past week.

“I am London Breed, I am president of the San Francisco Board of Supervisors, and soon to be mayor of the city and county of San Francisco,” she told a crowd gathered downtown after Leno conceded. “I am truly humbled, and I am truly honored.”

Born in San Francisco, Breed was raised by her grandmother in the city’s public housing.

Breed praised United States Senator Kamala Harris (D-Calif.), among others, as being an influence. She said she wanted to emulate her grandmother, who took care of the community and looked after everyone.

“It’s really amazing, and it’s really an honor and I know it means so much to so many people,” she said, responding to a question about being the first African American female to earn election to the city’s mayor’s office. “This is my home and I grew up in some of the most challenging of circumstances.”

Breed continued: “I think the message that this sends to the next generation of young people growing up in this city, that no matter where you come from, you can do anything you want to do.”

In a January interview with NNPA Newswire, Breed said she planned to remain the same outspoken, 43-year-old who was raised on the hard knock streets of the Fillmore District, just southwest of Nob Hill.

“People sometimes say about me, ‘I can’t believe, she said that.’ I remind them, I’m from Fillmore, but I say it in the way we say it in the streets—‘Fill-Mo,’” Breed said. “When you come from the kind of community that I come from and experience a lot of frustration, if you are not outspoken you can’t get the things done that you need to [get done].”

After first being appointed to take over for Lee after his death on December 12, local media noted that Breed has been criticized for being “headstrong” and “outspoken,” once even announcing to her peers that she “was no shrinking violet.”

“I am who I am, and I didn’t think I’d ever run for office, because I am who I am,” Breed said. “I say what I feel like I need to say and that’s how I’ve always been, and I couldn’t live with myself, if I felt that I have to change to be an elected official.”

This article was originally published on BlackPressUSA.com.

This article was originally published on BlackPressUSA.com.