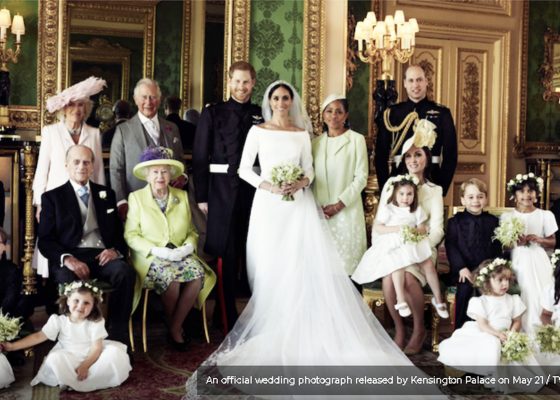 A sermon on the civil rights movement and slavery in America and the soulful sounds of a gospel choir were important parts of the ceremony.

The marriage of American actress Meghan Markle and Britain’s Prince Harry on Saturday was anything but the traditional royal protocol for a wedding at Windsor Castle in England. From a sermon by the first Black leader of the Episcopal Church in the United States to a soul-stirring gospel choir, it was clear that Markle is taking her African-American heritage with her as she begins a new life as one of Britain’s royals.

In a 14-minute message called “The Power of Love,” The Most Rev. Bishop Michael Curry of Chicago gave a sermon that echoed throughout St. George’s Castle.

Curry made sure to bring up the teachings of civil rights icon Dr. Martin Luther King, Jr.

He also quoted a slave song.

“Oh there’s power in love. There’s power. Not just in its romantic forms,” he said.

“I’m talking about some power, real power, power to change the world … If you don’t believe me, there were some old slaves in America’s South who explained the power of love.”

Curry continued, “They sang a spiritual, even in the midst of their captivity. It’s the one that says there’s a balm in Gilead, a healing balm.”

Bishop Curry brought up the  slaves talking about the old song  the healing balm of Gilead to heal the sin sick soul.  Preach!! This is church at the royal wedding.

Markle’s mother, Doria Ragland, also had a significant presence. Ragland, who is Black, has locks, a rose ring and is a yoga instructor and social worker in Los Angeles, rode in the Queen’s Rolls-Royce Phantom to the ceremony with her daughter beaming with pride.

Ragland was actually the only blood relative from Markle’s family present. Her father, Thomas Markle, who is white, did not attend. He and Ragland divorced when Markle was a young child.

“My dad is Caucasian and my mom is African American. I’m half black and half white,” Markle wrote in a column for ELLE magazine in 2015.

#MeghanMarkle’s mother, Doria, watches the ceremony. Nothing like a mother’s love. #RoyalWedding

Karen Gibson and The Kingdom Choir gave a heartfelt performance of Ben E. King’s “Stand By Me.”

And when the newly wed Duke and Duchess of Sussex exited the chapel, the gospel choir singing “Amen,” and then “This Little Light of Mine” serenaded them.

“This little light of mine, I’m gonna let it shine …” #RoyalWedding