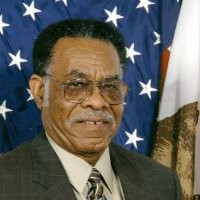 Charley B. Glasper,  took up residence in Victorville, CA in December 1982 and retired from the Air Force in November 1983.  After the passing of his former wife, Daisy M. Glasper in November 1997, he moved to the City of Adelanto. He married Evelyn Malcom in November 1999.

Charley was a retired Military and Civil Servant. He was last employed as a Federal Civil Service Employee with the U.S. Army Airworthiness Flight Test Directorate at Edwards AFB, California from February 21, 1984 to December 20, 1996. During this period, he achieved the position of Chief of the Supply and Maintenance Division and retired as a Grade WS-17.   On November 4, 2004, he was elected to the City Council for the City of Adelanto, CA. for a four-year term.   After the 2006 election, he was appointed the Mayor Pro Tem for the City.  In the November 2008 election, he was elected Mayor for the City of Adelanto for a two-year term. In 2014 Election he was elected to another four-year term to the Adelanto City Council.

Charley was active in the Community.  He was the Victor Valley District and Technical Coordinator for the AARP/TAX-AIDE Income Tax Program and Lead volunteer for preparing Electronic Tax returns in the Victor Valley High Desert areas for senior citizens and low-income families. In  2006  he was elected President of the Victor Valley NAACP Branch 1082 for two years.  An usher, and member of the volunteer money counting team at the Gate Church of the High Desert in Victorville.  A member of the AMVETS Post 20, VFW Post 9410, and AMERICAN LEGION Post 229 located in Adelanto, CA.  He also served on the Board of Directors for the Adelanto Community Resource Center; 2010 Chairperson of the Air Quality Board of the Mojave District; Board Member of the San Bernardino Association of Governments; the City of Adelanto representative to the California League of Cities. A member of the Victor Valley African American Chamber of Commerce, the Hispanic Chamber of Commerce, and the City of Adelanto Chamber of Commerce.  Lastly, he is member of the following Prince Hall Fraternities:  High-Desert Lodge No. 107 F&AM, PHA, Victorville, CA; Rio Grande Consistory No. 24, El Paso, TX; Oro Temple No. 9, El Paso, TX; Grand Inspector General 33 Degree of The United Supreme Council A.A.S.R of Freemasonry, S.J., U.S.A. (PHA) Grand Orient of Washington, D.C.

He leaves to cherish his memory, his loving wife, Evelyn  Malcolm Glasper and adult children:  The following adult children are attributed to his past and present marriages to Daisy M. Glasper and Evelyn Malcom-Glasper: