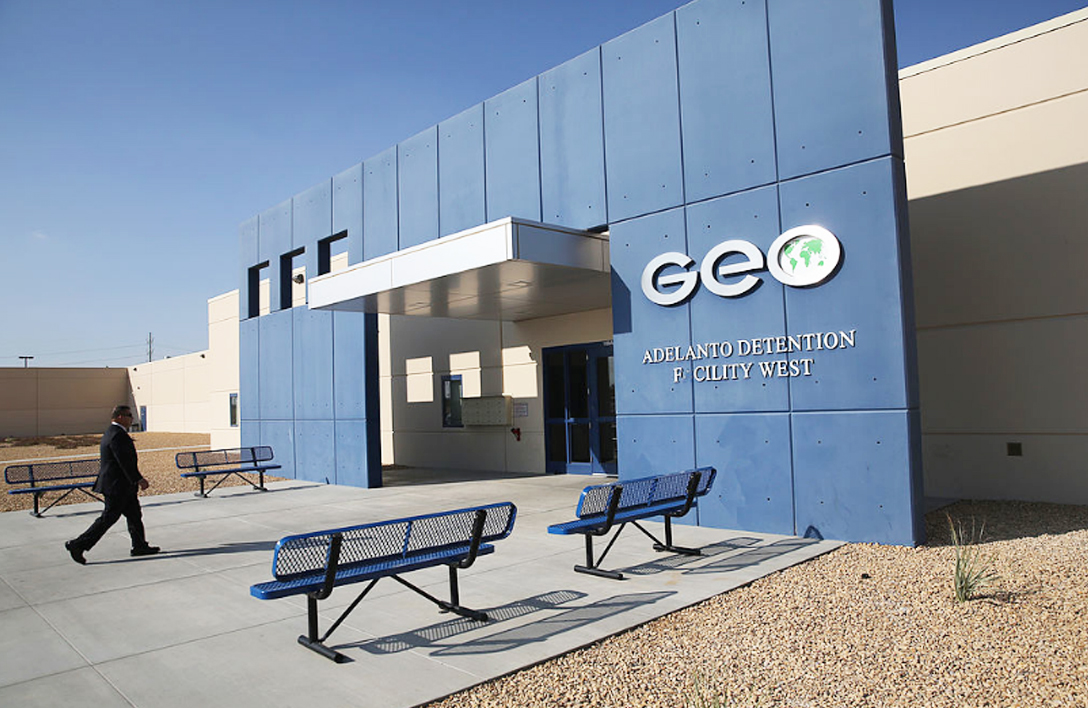 Why ICE’s immigration detention facilities throughout the country have become COVID-19 hotspots.

Transfers of people from criminal custody to immigration detention facilities already constituted a detention-to-deportation pipeline prior to the coronavirus pandemic, but advocates now worry that ICE is transferring people into virus hotbeds. While local and state authorities have granted incarcerated people early release from jails and prisons, people are being caught by ICE’s dragnet use of detainers, further risking the spread of the virus. ICE detention facilities have already become hotspots for the virus throughout the country.

Nearly half of ICE’s tested detainees have tested positive for COVID-19.

Some, like Sonoma County resident Coraima Sanchez Nuñez, were transferred to an immigration detention facility before the pandemic. Nuñez was arrested for a probation violation last July, and said she planned, upon release from Sonoma County Jail, to take up her reserved spot in a rehabilitation center.

But ICE issued a detainer, a request to state and local law enforcement agencies to notify them of a person’s release date and to facilitate the transfer of custody, which officials aren’t required by state law to comply with. Nuñez was moved to a facility in San Francisco, then transferred to the Mesa Verde immigration detention facility in Bakersfield, California, where she was held for eight months. As an asthmatic, Nuñez is particularly vulnerable to the virus, but said poor sanitary conditions in Mesa Verde put everyone detained there at risk of getting COVID-19.

For weeks, according to Nuñez, soap dispensers were absent in communal restrooms, and only around mid-April — long after local and national public health officials had issued physical distancing and sanitation recommendations — did Mesa Verde staff finally install one at the entrance to the women’s dorm, after detainees went on a hunger strike. Immigration officials provide one small shampoo bottle and one bar of soap every other day for personal hygiene, including washing hands, bathing and cleaning personal products. Nuñez said detainees, responsible for cleaning the dorm and restrooms, used shampoo, toothpaste and lotion to clean common spaces.

Nuñez went on a two and a half week hunger strike to demand access to protective equipment and testing. “It was like no virus ever existed,” she said. She added that when people exhibited coronavirus symptoms, they were not isolated from other detainees at Mesa Verde.

The transfer of people from county jails and state prisons into ICE custody continues to put many at risk.

Nuñez was part of an American Civil Liberties Union lawsuit filed last month, calling on California Gov. Gavin Newsom and Attorney General Xavier Becerra to stop transfers from California jails and prisons to ICE detention facilities. Such transfers account for most of ICE’s bookings into detention during the COVID-19 pandemic, according to the ACLU. Normally, these transfers make up a significant part of new bookings in immigration detention centers. In 2018, inmates at California prisons and jails comprised 38 percent of all ICE arrests in the state, with 30.5 percent coming from local jails and 7.5 percent from state prisons. This week, however, the California Supreme Court rejected the lawsuit.

So far, ICE has reported that 986 detainees have tested positive for COVID-19. The Otay Mesa Detention Center in San Diego is home to the worst known outbreak, with 149 detainees testing positive. However, only 2,045 out of 27,908 people in ICE custody have been tested. In other parts of the country, ICE transfers have already contributed to the spread of the virus. Nearly two dozen detainees who were moved from New York and Pennsylvania jails have tested positive for COVID-19.

Russell Hott, ICE’s acting assistant director for the Custody Management Division, told a federal district judge that ICE is continuing to transfer detainees from state and local criminal custody, while Enforcement and Removal Operations has otherwise “limited the intake of new detainees being introduced into the ICE detention system.” By April 15, Hott said, ICE’s detained population had dropped by 4,000 since March, and it had reduced its number of arrests by 5,372.

Only after starting a hunger strike were detainees given access to personal protective equipment.

But the transfer of people into ICE custody continues to put many at risk. The Centers for Disease Control has specifically urged authorities to “restrict transfers of incarcerated/detained persons to and from other jurisdictions and facilities, unless necessary for medical evaluation, medical isolation/quarantine, clinical care, extenuating security concerns, or to prevent overcrowding.”

There have been efforts from local and state officials to release inmates early from jails and prisons because of the pandemic. California Gov.  Newsom granted early release to approximately 3,500 inmates to reduce crowding as infections began to spread through the state prison system in March. In Los Angeles, Superior Court Judge Sam Ohta ordered the expedited release of pre-trial defendants, considering that detention during the pandemic “could affect the defendant’s health, the health of other detainees, or the health of personnel staffing the anticipated place of confinement.” Among those released because of the risk posed to them by COVID-19 was a 68-year-old man.  After being released by the L.A. County Sheriff’s Department, he was detained by ICE and transferred to Adelanto immigration detention center in San Bernardino County, California.

“It makes very little sense,” said ACLU of Southern California Director of Immigrants’ Rights and senior staff attorney Jennie Pasquarella. “You’re counteracting whatever efforts have been made to reduce populations who are detained because of the threat not only to the detainees, but to public health in general. Those efforts are counteracted by then putting those same people in another carceral setting.”

“The governor and the attorney general have a moral and constitutional obligation to stop transferring people to ICE custody during the pandemic.”

Emily Ryo, a law and sociology professor at the University of Southern California’s Gould School of Law who has studied immigration transfers, calls transfers during the pandemic “antithetical” to state and local efforts to address the situation. “It’s causing obviously a big public health threat,” she said, “given the risks involved in overcrowding in congregate settings, and given that it’s not really possible to practice social distancing or practice the level of hygiene necessary to stop the spread of the virus.”

While detained at Mesa Verde, said Nuñez, some people who had transferred from county jails were not quarantined or tested before being allowed into the dorms. And it was only after starting a hunger strike along with 39 other detainees that they were given access to protective equipment. “Being stuck in a congregate setting in immigration detention feels like a death trap,” said Nuñez in her declaration as part of the ACLU lawsuit. “We cannot engage in social distancing, we are forced to make do with the hotel-sized shampoo bottles and bar soaps, and we are not provided with any protective equipment to prevent the spread of the virus.” Having been released two weeks ago, under supervised release and required to wear an ankle monitor, Nuñez said she’s worried about those currently in detention. “I felt forgotten. It’s like two different worlds, being in there and out here,” she said. “I didn’t feel safe. I feel like they’re not ready to handle an outbreak inside.”

ICE Public Affairs Officer Jonathan Moor said in a statement to Capital & Main that there have been no COVID-19 positive detainees at Mesa Verde as of May 15. When asked about detainees’ access to testing, Moor said ICE “is taking all necessary precautionary measures to ensure all ICE detainees are screened medically upon their arrival to our facilities.”

He added: “Comprehensive protocols are in place for the protection of staff and detainee patients, including the appropriate use of personal protective equipment (PPE), in accordance with CDC guidance. Medical professionals at ICE detention facilities will also conduct a detailed medical screening for all new ICE detainees within 24 hours of their arrival to ensure that contagious diseases are not spread throughout the facility.”

Last week, 13 women were released from Mesa Verde after a federal judge ordered ICE to identify people to release in order to allow for social distancing during the pandemic in Mesa Verde and Yuba County Jail, a county-run facility that houses both county inmates and ICE detainees in Northern California. A federal judge also ruled that immigration officials must restrict new admissions to the Adelanto immigration facility and drastically reduce the detainee population. As of May 14, 324 people have been released on judicial orders, according to ICE.

Gov. Newsom’s office responded to the lawsuit calling for a moratorium on transfers, telling the ACLU to instead bring a suit against ICE directly, and cited Senate Bill 54, passed in 2017, which calls on state and local law enforcement officials to use discretion when cooperating with immigration detainers. Although the California Supreme Court on Wednesday rejected the lawsuit, it didn’t call into question the governor’s authority to take action that safeguards immigration detainees from safety and health risks.

Pasquarella called the California Supreme Court’s rejection of the lawsuit “disappointing.” “But it does not change the fact that the governor and the attorney general have a moral and constitutional obligation to stop transferring people to ICE custody during the pandemic. California cannot pretend it is not responsible for the virus’s spread and the loss of life in ICE’s detention facilities,” she said.

According to Ryo, ICE’s default use of detention will continue to pose a threat to public health and should be a last resort. She urges the implementation of supervised release, electronic ankle monitoring, or releasing people on their own recognizance or on bail, especially in light of the pandemic.

“All those things are alternatives that ICE can use as a tool to ensure a court appearance,” Ryo said. “And the fact that it’s looking to detention as its first choice, rather than a choice of last resort, and doing so in this pandemic, speaks volumes about its refusal to recognize civil liberties that can also be important to public health safety.”