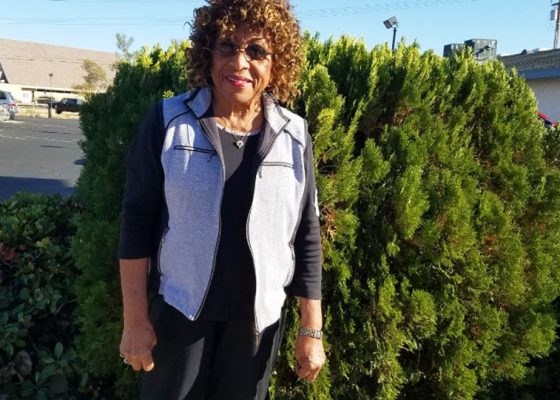 I had the opportunity to sit and chat with Mrs. Gloria Roberts about her life, it was based upon the fact that a fifty year memorial for her late husband is being planned.  Gloria met her future husband in Melbourne, Florida when he was already in the Air Security police, they were married after she graduated from high school.  Their wedding date was October 16 1955, by that time she was attending Bethune Cookman College (an HBCU).

Her husband Isiah Roberts was transferred to Japan, but she remained in college and finished out the year, shortly afterwards she joined him in Japan where she resided for two years.  By the time they returned to Patrick Air Force Base, FL, the family had grown, with the birth of their son Gary.  The family would remain stateside, except for temporary duties for Tech Sgt. Roberts.

The family arrived at George AFB, Victorville in 1965, their family had once again increased with two daughters, Terri and Windsor.  They were an idealic military family residing on the base, and life was good.  Then on the night of April 17, 1969, tragedy struck; the idealic life they had shared was shattered when the office of security police received a telephone call concerning domestic altercation in the housing unit.  As a matter of fact; Sgt Roberts knew the family, so he took the call and went with another officer to check out the complaint.  As they were leaving the residence, shots rang out.  Tech Sgt. Roberts was shot at least five times in the back.  The only reason he went on the call was because he knew the airman involved, they had worked together.

The aftermath:  I asked Mrs. Roberts some deep questions about this period in her life, when the life she was living was shattered in a moment.  What was it like as a Believer dealing with forgiveness towards this individual.  She answered truthfully, forgiveness came slowly, finally her youngest daughter, Windsor, said:” I can forgive him”.

Mrs. Roberts stated that the fact the accused was sentenced to 7 years to life, but only served seven years at Fort Leavensworth Federal prison was very difficult to deal with.  In retrospect, as she looks back there is the undeniable fact that divine

intervention carried her and the children through those early years.  Though the hurdles were high, she persevered.  A sister came and stayed with her, this enabled her to return to school and get her Bachelor and Masters degree in education.  She taught in the Adelanto Elementary School District until retirement

Fifty years later, the community she embraced, has moved forward to host a special commemoration of Tech Sgt Roberts life. There will be a memorial banquet held on November 9, 2019.  The legacy dinner will honor Sgt. Roberts and family for their sacrifice and will establish an ongoing legacy for other service personnel who served honorably at the former George AFB.  The building that was formerly named in Roberts honor has been demolished.  That segment of local history has not been adequately preserved.

The event will be held at Hilton Garden Inn, from 6 pm to 9 pm.  Tickets are $50.00 each. And can be purchased online at: http://www.Don.Frse.com/Roberts.