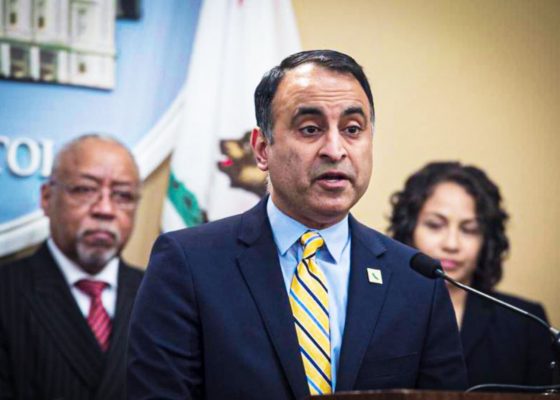 How an agency charged with protecting public health gave talking points to the lead-battery industry.

In September 2018 then-Gov. Jerry Brown vetoed legislation requiring the California Department of Public Health to refer worker lead poisoning cases to the enforcement agency Cal/OSHA. Brown claimed the bill was unnecessary. Capital & Main’s continuing investigation of the CDPH, however, has found that the agency’s top officials appear to have recently assisted lobbyists representing the lead-acid battery industry who want to kill or weaken the current measure, which was reintroduced this year as Assembly Bill 35. Our investigation found that the CDPH’s amicable relationship with lobbyists isn’t confined to the battery industry and raises questions about the agency’s commitment to protecting public health.

Since 2018, Battery Council International (BCI), an industry association representing lead-battery makers and recyclers, has spent about $200,000 in California , much of it lobbying against AB 35 and its 2018 predecessor, which were introduced by San Jose Assemblymember Ash Kalra, according to lobbying disclosures. Kalra’s legislation came in the wake of Capital & Main and the USC Annenberg Center for Health Journalism’s joint investigation into hundreds of lead-poisoning cases at gun ranges, battery recycling plants and other California workplaces. Our investigation found that CDPH tracked cases yet failed to refer even egregious offenders to Cal/OSHA, which has the authority to inspect and, if necessary, shut down dangerous work sites. Kalra’s bill would require CDPH to do so whenever a worker’s blood lead surpasses a certain level.

Last June, Robert Moutrie, a California Chamber of Commerce lobbyist, and two lobbyists from KP Public Affairs, which represents the Battery Council in Sacramento, reached out to Monica Wagoner, CDPH’s longtime deputy director of legislative and governmental affairs. “We, and other businesses,” the lobbyists emailed, “are trying to defend OLPPP’s [CDPH’s Occupational Lead Poisoning Protection Program] role and value in investigating elevated blood lead levels prior to forwarding to OSHA.” The lobbyists said they were short on time and needed data to convince legislators that the bill should be revised. Wagoner responded to the email within 45 minutes and provided extensive answers two days later.

“How many cases are referred to Cal/OSHA in a given year?” the lobbyists asked.

“Exact numbers are not available at the moment,” Wagoner responded, “but generally 5-10 per year.”

The number of referrals gave the lobbyists something they were likely looking for—namely, evidence giving the impression that CDPH’s OLPPP office refers lead poisoning cases to Cal/OSHA on a regular basis, so that the enforcement agency can take action. While Wagoner had claimed that the exact numbers of CDPH referrals to Cal/OSHA were unavailable to her, they were available to Capital & Main from both Cal/OSHA and CDPH, through public-records requests. Since 2014 CDPH has referred just five workplaces with lead-related issues for inspection, even though at least 80 companies have employed lead-poisoned workers during this time period. Wagoner had overestimated CDPH willingness to refer cases by a factor of 10. In June, Wagoner’s office also held a conference call with the lobbyists with the stated aim of discussing possible amendments to the bill.

Afterward, Moultrie sent to Kalra’s office highly complex proposed amendments that would essentially gut his bill by reinforcing OLPPP’s authority to hold off referring lead poisoning cases. Kalra rejected the suggestions, and the bill passed the Senate Labor Committee in July, but a question remains: Did Wagoner’s assistance to industry lobbyists cross a line and amount to a brainstorming session on finding ways to kill AB 35?

In response to a call to Moultrie, the Cal Chamber forwarded to Capital & Main a copy of its letter to Gov. Newsom seeking his veto. Wagoner, a former lobbyist for the California Restaurant Association, did not respond to questions for this story. Asked why Wagoner may have overestimated the number of OSHA referrals, CDPH acting director of public affairs Corey Egel said, “The California Department of Public Health (CDPH) provided responses to broad and general questions concerning the operations of OLPPP.” In fact, the lobbyists had asked Wagoner to provide a granular assessment of the number of referrals to Cal/OSHA it makes.

To be sure, part of Wagoner’s job is to engage with stakeholders, including industry lobbyists.  “We acknowledge our stakeholders as customers, listen to them, and take their needs into account,” CDPH’s Governmental Affairs website says.

As far as AB 35 goes, however, that commitment appears to have been extended only to one side. Kalra’s office received a cold shoulder last year when it asked Wagoner for input as Kalra sought to pass AB 2963, the version of the bill that was later vetoed by Brown. During that campaign, emails show, Wagoner canceled a conference call with Kalra’s office and took months to answer written questions from the assemblymember’s staff. Bill Allayaud, legislative director of the Environmental Working Group, the bill’s sponsor, said this year it was obvious that CDPH was opposed to the bill and so advocates for the legislation didn’t even bother asking for a meeting. “It’s pretty troubling that we couldn’t even get a meeting with the department over a period of months, compared to [its] partner-like response to industry,” Allayaud said of his 2018 experience.

Other CDPH critics accuse the agency of siding with the very industries it is charged with regulating. Several who were interviewed for this story cited CDPH’s seven-year refusal to release a cellphone radiation study as an example of protecting industry concerns rather than public health. After three years of attempting to get the study released through public-records requests and personal appeals to CDPH officials (including the department’s director, Dr. Karen Smith), Joel Moskowitz, director of the Center for Family and Community Health at the University of California, Berkeley, School of Public Health, finally forced CDPH to release it by filing a lawsuit. The study included guidance for consumers to reduce cellphone radiation. “The CDPH must become more proactive to ensure environmental and public health in California,” Moskowitz told Capital & Main.

In its battle to keep the agency’s cellphone study from being released, CDPH had argued in court documents that public disclosure would cause “unnecessary panic” and harm to cellphone companies, a sentiment echoed by CTIA, a wireless-industry trade group whose members include AT&T and Verizon. A Sacramento Superior Court judge, in ordering the study’s release, ruled that there is “significant public interest in DPH’s investigation into risks associated with cellular phone use.” The court battle cost California taxpayers $115,000 in legal fees and court costs imposed by the judge, plus an undetermined number of hours of staff time.

As with some other CDPH controversies, the cellphone-study narrative circled back to director Dr. Karen Smith’s deputy, Monica Wagoner. UC Berkeley’s Joel Moskowitz, according to court documents, reached out to the legislative director in 2014, seeking her assistance with the study’s release. A complaint against CDPH, filed on behalf of Moskowitz by the First Amendment Project, stated that “Dr. Moskowitz phoned Monica Wagoner, CDPH Deputy Director of Legislative Affairs, to inquire about the Document’s status.” Wagoner blamed another agency for the delay. “Ms. Wagoner stated that a state agency outside of CDPH was reviewing the Document. Ms. Wagoner promised to update Dr. Moskowitz on the status of the Document, but never did.”

“The atmosphere Karen Smith engendered was a very industry friendly kind of culture,” says Janet Nudelman, director of program and policy for Breast Cancer Prevention Partners. Nudelman has spearheaded several pieces of legislation, including the California Safe Cosmetics Act of 2005. The act created a department at CDPH to monitor cosmetics for carcinogens. As such, it has become a frequent target of the Personal Care Products Council, the industry lobby that represents the multibillion-dollar cosmetics industry and spends about $400,000 per year lobbying in Sacramento.

To Nudelman’s dismay the program, under Dr. Smith, who was appointed in 2015 by Governor Brown, received less than half the funding it needed and operated with a skeleton staff. Nudelman claims Smith and Wagoner did nothing to secure more funding from the Brown administration.

“We were waiting for years for the CDPH leadership to get this program the money that it needed and deserved,” said Nudelman, “and they just would not stand up” for it.