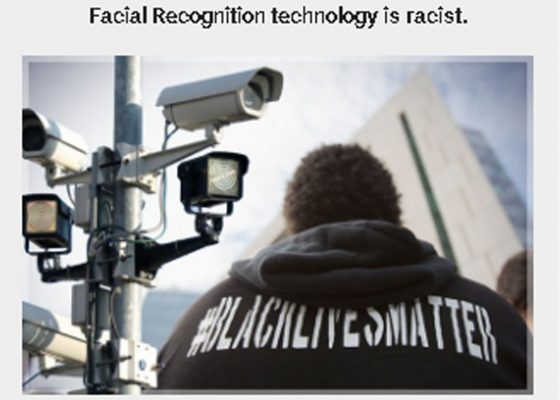 Facial recognition technology uses algorithms to replicate the racial bias in policing that has had life-threatening consequences for Black people and our communities. This invasive technology is racist and inaccurate, misidentifies women and people of color, and reinforces a system of oppression that surveils and targets Black people on baseless grounds, while also demonizing our physical appearance.1 Widespread use of this technology by law enforcement will lead to even more police encounters, wrongful arrests, harassment, and deportation. With error rates as high as 98%, facial recognition is one of the most dangerous forms of surveillance for our communities, and we must tell lawmakers to ban this technology.2

Tell your members of Congress to ban facial recognition.

Facial recognition technology, at its core, is a flawed form of surveillance that comes at the expense of basic civil rights, security, and privacy. It has been scientifically proven that this form of surveillance is inaccurate and miscategorizes the faces of women and Black people.3 In a test recently conducted by the American Civil Liberties Union, the facial recognition technology Rekognition, used by Amazon on the general public, incorrectly matched the photos of 28 members of Congress with mug shots of individuals with previous arrests. Alarmingly, these false matches also disproportionately identified six members of the Congressional Black Caucus.4 With police violence against Black people at an all-time high, allowing lawmakers to implement facial recognition programs will result in increased and potentially violent interactions with the police.

Protect our civil rights and tell your lawmakers to ban facial recognition.

Color Of Change has fought for the San Francisco Board of Supervisors to adopt the Stop Secret Surveillance Ordinance, banning San Francisco agencies from acquiring or using facial recognition technologies. We are expanding our efforts to hold elected officials accountable for racially biased technologies by partnering with over 30 organizations to ensure this evasive technology does not further oppress and harm our communities.

From COINTELPRO to the FBI’s use of the baseless “Black identity extremist” term, Black people are continuously being targeted through laws and legislation. Facial recognition technology is unjust and dangerous, and circumvents the law. We must take a stand to protect our civil rights and prevent unnecessary interactions with the police that can be traumatic or have deadly consequences. Tell your lawmakers to ban facial recognition technology.

Until justice is real,