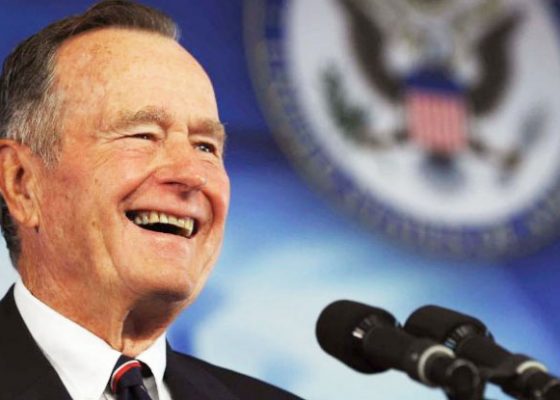 (CNN)George H.W. Bush can perform one last, posthumous service to his country this week by orchestrating a rare moment of unity and a short-term truce in the rancorous politics swirling around the crisis-stricken Trump presidency.

The remains of the former president, who died at home in Texas on Friday night at 94, will be brought to Washington on Monday to allow the nation to bid farewell to a man whose one-term presidency looks better with each year that passes.

The ex-commander-in-chief will lie in state at the US Capitol ahead of a state funeral service in Washington National Cathedral on Wednesday that will see a meeting of the world’s most exclusive club — that of former presidents.

For a few days, a building showdown over a possible partial government shutdown may ease, and the increasing threat posed to the Trump presidency by special counsel Robert Mueller could fade into the background.

Despite antipathy between the Bush family and President Donald Trump, the 41st president made clear he wanted America’s current leader to be at the funeral, putting the institution of the presidency above personal animosities.

Trump has confirmed he will attend the event, which follows a series of national disasters and tragedies and moments of public mourning that have caused critics to fault his behavior as short of that expected of a president.

To his credit, Trump canceled what was certain to be a contentious news conference at the G20 summit in Argentina on Saturday out of respect for Bush. He also sent one of the iconic blue-and-white 747 jets that serves as Air Force One when a president is aboard to Texas to carry Bush’s casket.

“We’ll be spending three days of mourning and three days of celebrating a really great man’s life,” Trump said in Argentina in a gracious tribute.

“So we look forward to doing that, and he certainly deserves it. He really does. He was a very special person.”

But Wednesday’s ceremony still promises to be an awkward moment of political theater for Trump, since he will come face-to-face with former presidents and other top officials whom he has attacked in recent days.

Just last week for instance, Trump retweeted an image that pictures former Presidents Barack Obama and Bill Clinton, along with former campaign rival Hillary Clinton, behind bars. Trump often beams at rallies as his crowds chant “lock her up!” about the former Democratic nominee. And Michelle Obama wrote in her new autobiography that she will “never forgive” Trump for his conspiracy theory about Obama’s birthplace that launched the real estate mogul and reality TV star’s political career.

Trump is likely to come face to face with all four in the National Cathedral before a huge television audience. The encounter will highlight how several of the former leaders, including Obama and Clinton, forged close relationships with their Republican predecessor as well as the friendly relations between them and Bush’s son, former President George W. Bush. No such ties exist between that trio and the current President, who often criticizes his predecessors and has given no sign of taking advantage of their advice and experience of doing one of the toughest and loneliest jobs in global politics.

The President also belittled another of the elder Bush’s sons, former Republican presidential candidate Jeb Bush, during the 2016 campaign, and in July, mocked a signature quote by the 41st president about a “thousand points of light,” which was later used as the name of his charity.

George H.W. Bush was the exact political opposite of Donald Trump

George H.W. Bush was the exact political opposite of Donald Trump

Wednesday’s state funeral will offer similarities and contrasts to the final farewell for John McCain in September, to which Trump was not invited after mocking the Arizona senator during the 2016 campaign for being shot down and imprisoned in Vietnam nearly 50 years before.

McCain’s service, by the late Republican senator’s design, became an extended comparison between his heroism, capacity to reach across the aisle and ethos of service and the self-promoting behavior often displayed by Trump.

Such analogies are likely to be perceived again in the tributes to Bush, who was almost universally regarded as a gentleman and a throwback to a more civil and magnanimous era of politics.

Still, with Trump attending, and if he desists from his trademark inflammatory politics, the nation’s divides could be papered over, at least for a few days.

Bush’s passing also looks set to postpone one of the final political showdowns of the year — a funding controversy entangled in Trump’s demands for $5 billion in funding for his border wall.

A source briefed on the talks told CNN that lawmakers are considering taking up a one-week spending bill to avoid a partial government shutdown by a Friday deadline, since Congress will be out of session at the beginning of the week ahead of Bush’s ceremonies.

Trump told reporters on Air Force One on Saturday night that he would be open to such a solution.

“I would absolutely consider it and probably give it,” Trump said.

Washington’s period of mourning come at a fraught moment in Trump’s presidency, after a week in which it became clear that Mueller is narrowing in on the President as his investigation gathers pace.

On Thursday, Mueller unveiled a cooperation agreement with Trump’s former lawyer Michael Cohen. Cohen admitted to lying to Congress to cover up the fact that he was negotiating a deal to build a Trump Tower in Moscow right up until June 2016 during the presidential campaign.

He had previously said talks about the Moscow project ended in January 2016 and said he lied out of a sense of obligation to Trump.

A pair of developments on Friday night appeared to bring the probe even closer to the White House. CNN reported that Cohen believed that Trump would offer him a pardon in exchange for staying on message in in talks with federal prosecutors.

Cohen believed Trump would pardon him, but then things changed

Cohen believed Trump would pardon him, but then things changed

Trump’s lawyer, Rudy Giuliani, said Trump never indicated any such possibility to Cohen. But the report immediately sparked speculation about communications between the two men. Any proof that Trump had offered a pardon in return for Cohen’s testimony would be an abuse of power and possibly an impeachable offense.

Then, in a filing later on Friday, Cohen’s lawyers offered the clearest sign yet that he kept Trump informed of his efforts to close the deal in Moscow in 2016.

Michael Cohen&#39;s lawyers ask for no prison time for their client in sentencing memo

A political hiatus over the next few days might give Trump some brief relief from Russia questions but could also complicate his effort to celebrate an agreement with Chinese President Xi Jinping to stave off an escalation in the trade war between the world’s two largest economies.

Trump agreed to maintain 10% tariffs on $200 billion worth of Chinese goods, and not raise them to 25% “at this time” ahead of a January 1 deadline.

In exchange, China will buy a “very substantial” amount of agricultural, energy and other goods from the United States to help reduce the trade imbalance, according to a White House statement.

“If it happens it goes down as one of the largest deals ever made,” Trump said, though trade experts saw the agreement, while welcome, as more a temporary truce than a permanent peace deal to ease rising US-China tensions.