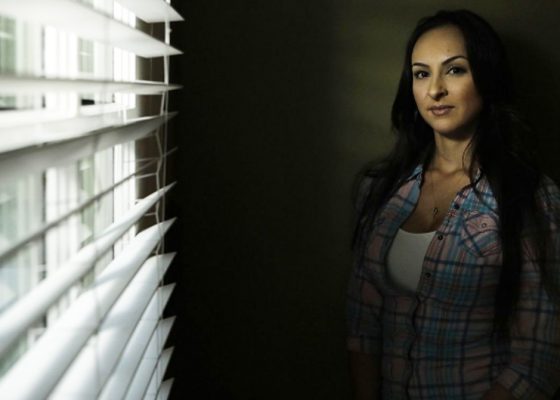 Angry that she had been falsely accused of a drug crime, Tatiana Lopez filed a complaint against a Los Angeles County sheriff’s deputy who had arrested her on suspicion of possessing methamphetamine.

But when Lopez met with a sheriff’s lieutenant to discuss her accusation, he urged her to drop her complaint, she said.

After a preliminary investigation, the Sheriff’s Department ruled the deputy had done nothing wrong, without giving her any explanation.

It would take years of legal battles before a judge exonerated Lopez and a new internal investigation led the department to fire the deputy for lying about her arrest.

Lopez is one of nearly 200,000 members of the public who filed a complaint against California law enforcement officers in the last decade. Her initial complaint ended the way most did — with police rejecting it without saying why.

A Times analysis of complaint data reported to the California Department of Justice shows law enforcement agencies across the state upheld 8.4% of complaints filed by members of the public from 2008 to 2017.

In a state with some of the strictest police privacy laws in the country, those who make complaints against officers are entitled to learn little more than whether their allegations were found to be true or not. They are given no other explanation about how a final decision was reached, what was done to investigate their allegation or whether an officer was disciplined.

A bill that cleared the state Legislature last month would begin to address the issue by opening up records from internal investigations into shootings by police officers and other major force incidents, as well as cases where officers were found to have committed sexual assault or lied on duty. Gov. Jerry Brown has not said whether he will sign the measure, Senate Bill 1421.

But even if he does, records from the vast majority of internal affairs investigations would remain secret.

The Times’ analysis of complaint data found several of California’s largest police agencies sustain complaints at a lower rate than the state average, including the L.A. County Sheriff’s Department and the Los Angeles and Oakland police departments.

Police officials argue that a large number of the complaints they receive are frivolous, filed by suspects they have arrested or others who have an ax to grind. Some said the proliferation of body-worn cameras among California police agencies has helped disprove a larger number of allegations about interactions between police and the public.

In Los Angeles, police said the low rate of upheld complaints was due, in part, to the department’s commitment to accepting a wide array of allegations. The LAPD received 25,006 complaints from the public in the last decade, according to state records. Officials concluded there was evidence proving 1,360, about 5.4%.

“We take every single complaint on the planet,” said Josh Rubenstein, the LAPD’s chief spokesman. “When you open yourself up to that wide a spectrum, you are going to get a high number of complaints that are not legitimate.”

Cmdr. Michael Hyams, who heads the LAPD’s Internal Affairs division, said that by examining even the flimsiest of allegations, the department has proved it will heavily scrutinize its own officers. He noted there has been a dramatic drop in citizen complaints against LAPD officers. State records show the number fell by roughly 67% from 2008 to 2017.

At the Sheriff’s Department, internal investigators upheld only 69 of 15,661 complaints made by members of the public in the last decade, less than 1%, according to figures the agency reported to the state.

Nicole Nishida, a department spokeswoman, said the agency had under-reported the number of sustained complaints to the state. By the department’s own accounting, roughly 8% of all public complaints were upheld from 2004 to 2016, she said.

Peter Bibring, director of police practices for the American Civil Liberties Union of California, said that a low rate of sustained complaints does not necessarily mean a department is doing a poor job of policing itself, but the lack of information disclosed about those investigations is a significant problem.

“If their complaint is rejected, they are not told why,” he said. “That lack of transparency prevents the public from having any faith that the process is working.”

California law requires police departments to report the number of citizen complaints and the outcome to the state’s Department of Justice, but no agency audits the data to ensure the figures are accurate. A DOJ spokeswoman said her agency is not required by law to conduct audits and hasn’t been given funding to do so. The state has gathered such data since 1981 and expanded the database to include information about racial profiling complaints in 2016.

Wayne Fisher, a former deputy attorney general in New Jersey who helped set the state’s guidelines for monitoring internal affairs complaints, said it was pointless to collect the data without checking to see whether some agencies are rejecting an abnormally large number of complaints and deserve more scrutiny.

“It acts as a pointer system to certain other areas that are screaming for analysis,” said Fisher, who now leads the Rutgers University Policing Institute.

Francine Tournour, a civilian watchdog for the Sacramento Police Department, agreed. Police departments need to be more open about their investigations into complaints about officers if they want the public to trust the results, she said.

“Part of this is customer service. Part of this is the relationship building,” she said. “If you have a process where people make complaints … and there’s no feeling that the complaint was taken seriously, you may see people stop bringing things to the department.”

In Sacramento, a city with a population of nearly 500,000, police reported only 18 complaints to the Department of Justice last year. Det. Eddie Macaulay, a department spokesman, said the agency did not include an additional 301 informal ”inquiries,” a label used when department officials believed it was clear that an accusation did not amount to a violation of policy or crime. Had the department included those inquiries in its reporting to the state, its rate of sustained complaints would have plummeted.

Tournour, who heads the Sacramento Office of Public Safety Accountability, warned that handling such complaints informally can distort the history of documented allegations against individual officers — and a department as a whole.

In 2016, Jasmine Abuslin accused more than a dozen Oakland police officers of having sex with her, sometimes in exchange for information about prostitution raids. Her accusations — including that the misconduct began when she was underage — sparked a scandal that made national headlines and led to the firing and prosecution of several police officers.

During her first contact with an internal affairs investigator, Abuslin said the police official seemed uninterested in her allegations.

“I felt like she wasn’t taking me seriously,” she said.

She also accused internal affairs investigators of threatening her for coming forward and of allowing her to delete text messages that could have proved her allegations.

Members of the public have filed 16,345 complaints of misconduct against Oakland police officers in the last decade, according to the state data. Only 1,073 of those complaints, roughly 6.5%, were sustained.

Oakland police did not respond to requests for comment.

In recent years, police agencies in California have had to report more details about citizen complaints and their outcomes, including how many they decided were false, involved conduct that did not amount to a policy violation or could not be proved or disproved. Last year, police agencies statewide concluded that 28% of complaints were false.

In Fresno, Chief Jerry Dyer said he has sought more thorough investigations and urged his internal affairs department to revisit investigations where it could not prove or disprove a misconduct allegation.

Fresno has one of the highest rates of sustained complaints among California’s largest cities. The department upheld 325 out of 1,332 citizen complaints in the last decade, roughly 24%, according to the state data. Last year, the agency reported it couldn’t prove or disprove less than 6% of complaints made by the public, compared with the statewide average of 25%.

The push for more conclusive results better serves the community, said Dyer, adding that he supports releasing more information about the way complaints are reviewed. The current process, which sees citizens simply receive a form letter announcing a complaint’s disposition, “raises a lot of concerns on the part of those voicing the complaint,” Dyer added, though he said he does not support making individual officer disciplinary records public.

For Lopez, the shortcomings of the internal investigation into her complaint about L.A. County sheriff’s deputies destroyed her trust in law enforcement.

The Downey woman was a college student with no criminal record in 2009 when three deputies trained their guns on her in a gas station parking lot. Deputy Francisco Enriquez alleged he found several bags of methamphetamine in his cruiser after she rode in its back seat. He said they fell out of her pocket.

Lopez said the ordeal had a lasting effect.

After an initial Sheriff’s Department review concluded that Enriquez and the other deputies did nothing wrong, the agency conducted a second investigation when Beck confronted authorities with the radio transmissions. A judge declared Lopez factually innocent. Enriquez was fired and charged with perjury, though the case was dismissed in 2015 after two separate juries deadlocked.

Nishida, the Sheriff’s Department spokeswoman, said “appropriate administrative action” was taken in response to Lopez’s allegations. She said she could not comment on what, if any, disciplinary action was taken against other deputies involved in Lopez’s arrest, citing California law that protects police discipline records from public scrutiny.

“The rest of them got away with all of it,” Beck said.