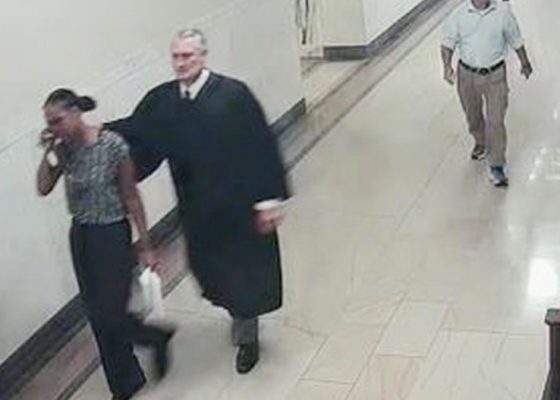 Hamilton, OH — Hamilton County Common Pleas Court Magistrate Michael Bachman has stepped down from his post to avoid “further consternation” after a video of him chasing down and grabbing a Black woman by her neck went public. The judge claims he was only trying to calm the woman who was “loudly screaming” in the court hallways, but many believe that her being Black was a factor in the altercation.

On September 4, Kassandra Jackson went to the courthouse to try filing a protection order, a document sought by people being threatened or stalked, but the court staff told her she was late for the 8 a.m. deadline. In the video, she could be seen arguing with them before leaving.

Bachman, who heard the noise from inside his courtroom, went outside, pointed his finger, and followed her. He caught up to her and they walked back to the courtroom together until Jackson tried to turn to a different hallway. That’s when Bachman grabbed her neck and shoulder, redirected her to the courtroom, and sat her on the jury box while she was tearing up.

Jackson, a 28-year-old Black woman, said she thought he came after her to help. Instead, Bachman held her in contempt of court and sentenced her to 10 days in jail — three days for her “disrespectful and disruptive behavior” outside his courtroom and seven more for resisting the deputies whom Bachman ordered to arrest her.

It wasn’t the first time Jackson had an encounter with Bachman. Last year, she also sought a protective order, Bachman denied, and she allegedly slammed her hand on a wall placard. He then sentenced her to five days confinement. In both cases, Bachman described her as “belligerent.”

While Bachman says he does not remember the incident last year, he told The Cincinnati Enquirer, “I suppose it shows… she is a person who has now shown on at least two occasions has no sense of decorum or respect for the courts.”

Jackson, a mother of two, was released after two days after Judge Kim Wilson Burke ordered the contempt charge dropped “for good cause.”

Meanwhile, Bachman resigned last week. He said, “I resigned in order to save the court further consternation. But had I known it was going to become public, I would have defended myself in the investigation.”

He insisted he was just trying to calm the woman down. “I wish there was sound with the video so you can hear how she yelled at the top of her lungs,” he said. “I could not hear the defense attorney questioning a witness.”

Moreover, William Gallagher, a Cincinnati defense attorney who was in Bachman’s courtroom during the incident, said Bachman has a “low tolerance for rule-breaking.” He added, “I don’t think we should be locking up all the people who yell in our courtroom hallways.”

Valerie Overstreet, Jackson’s neighbor described her as a loving, single mother. “People get emotional… but that doesn’t warrant people treating (others) like a criminal off the street.”

Overstreet’s partner, Lori Asbury, who is Black, cannot help but think that bias may have been a factor. “You can’t erase race as an issue,” she said. “It’s easier: ‘She’s lower-class, (in) poverty, and OK, she’s black. She’s expendable.’”