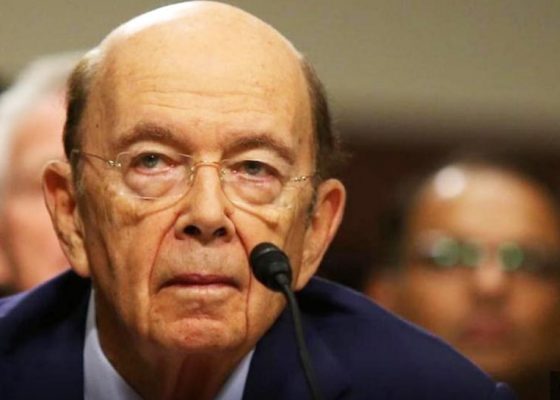 White man affirmative-action – the most often seen kind of affirmative action in America.

Secretary of Commerce Wilbur Ross allegedly bamboozled $120 million dollars from his Wall Street buddies over the years during his tenure as the head of the private-equity company WL Ross & Co., according to a report from Forbes.

The report alleges that Ross has been the target of numerous lawsuits alleging various financial improprieties. Ross is reported to be worth about $700 million. Last year, it was discovered that he overwhelmingly inflated his wealth in order to gain access to the exclusive Forbes billionaire’s list.

Forbes’s Dan Alexander reported that, based on conversations he had with 21 sources, Ross took incredible amounts of money from business partners and consistently swindled investors for his own personal gain.

The magazine states: “If even half of the accusations are legitimate, the current United States Secretary of Commerce could rank among the biggest grifters in American history.” Forbes went on to cite:

In 2005, former WL Ross vice chairman Peter Lusk sued the future commerce secretary for $20 million, ultimately alleging that he had tried to cut him out of his interests. The executives reached a settlement in 2007, which former WL Ross employees say cost roughly $10 million. Asked to comment on the suit, Ross responded, “The Lusk case ended with mutual confidentiality requirements.”

Three years ago, [equity manager David] Storper launched what became a $4 million lawsuit against both his former employer, WL Ross, and former boss, the commerce secretary, alleging that Ross stole his interests. Attorneys for Ross admitted in court filings that one of his companies took Storper’s interest and reallocated part of it to the commerce secretary. But Ross’ lawyers also insisted all of that was allowed under internal agreements. “Simply put,” they wrote, “this lawsuit is a personal vendetta against Mr. Ross.” After a judge rejected attempts to prevent the case from going to trial, just days before the jury selections the two sides agreed to settle.

A former colleague was even quoted saying, “He’s a pathological liar.”

It appears that Ross has had a problematic business reputation for quite some time. His dealings in upper echelon business circles landed him on Alexander’s radar again after Ross was appointed to the Secretary of Commerce position in 2017 by President Trump. After being appointed, Ross upheld his assets in foreign companies. This is an obvious conflict of interest. One of these firms had major ties to a Russian business magnate who had been hit with American sanctions. Last November, Ross signed a form stating that he had divested all the assets he had with the companies. That was a lie.

Of course, the White House vehemently denied the accusations. A statement issued by the Department of Commerce said: “The anonymously sourced Forbes story is based on false rumors, innuendo, and unverifiable claims. The fact remains that no regulator has made any of these accusations against the Secretary. This rehash of old stories is clearly the result of a personal vendetta. The baseless claims made in this story were well publicized long ago and are not news.”

Many people are unaware of what the Secretary of Commerce actually does. That role, specifically, develops and maintains relationships with the business community in order to initiate and grow job opportunities in industries for American workers.

The role requires someone who actively works in various communities, businesses and universities. This appointee would also engage with American workers to promote economic growth, job creation and balance economic development.

Having integrity and being ethical are paramount to this position. Given Ross’ alleged unscrupulous business dealings, how is he qualified or worthy of this role?