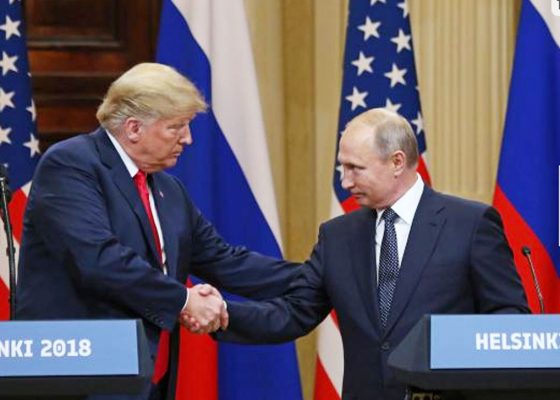 July 16 (UPI) — U.S. President Donald Trump and Russian President Vladimir Putin each expressed optimism at their summit in Helsinki on Monday, a meeting that ended with a controversial joint news conference.
At a press briefing at which both spoke, Trump said the two had “deeply productive dialogue.”
“It went well,” he said.
Trump said relations between the United States and Russia have “never been worse than it is now. That changed, about four hours ago.” He added that he and Putin “spent a great deal of time” on the issue of election meddling, and discussed the Syria crisis at length.
Trump’s remarks at the news conference were met by some with strong criticism — particularly for slamming Special Counsel Robert Mueller’s Russia investigation and appearing to back Putin’s denial that Moscow did not interfere in the 2016 U.S. election.
“He just said it’s not Russia,” Trump said. “I will say this. I don’t see any reason why it would be.”
Multiple members of Trump’s own government and the entire U.S. intelligence community have already concluded that Russia did indeed attempt to sway the vote in Trump’s favor.
“I have great confidence in my intelligence people, but I will tell you that President Putin was extremely strong and powerful in his denial today,” Trump said Monday.
On the topic, Putin emphatically stated, “The Russian state has not interfered and will not interfere in U.S. internal affairs.”
The Russian leader called the first meeting “a good conversation,” adding “I hope we start to get to know each other better.” Noting that “mutual interests abound,” he said he gave specific suggestions on dealing with crises under discussion. He indicated the talks were wide-ranging and covered nuclear non-proliferation, Middle Eastern affairs in Israel and Syria, Iran and the nuclear deal and Trump’s recent negotiations with North Korean leader Kim Jong Un.
“Syria could be the first showcase example of joint work,” he said. “We have all the required components” for peace.
Putin defended the Iran nuclear deal, from which the United States withdrew earlier this year, and called for security for Israel.
Also in the question period, Putin said Russia had no compromising information on Trump and that he was unaware that Trump was even in Russia during Trump’s several visits.
Putin also handed Trump a soccer ball, in honor of Russia’s successful hosting of the World Cup tournament this year and the United States picking up hosting duties in 2026.
Earlier, the pair met for a brief media session at about 7:10 a.m. before they held their first talks.
Trump congratulated Putin on Russia’s hosting the World Cup and said he looked forward to discussing a slate of issues with the Kremlin leader.
“I think the world wants to see us get along. We are the two great nuclear powers, we have 90 percent of the world’s nuclear [weapons]. That’s not a good thing, that’s a bad thing,” Trump said at the brief media session. “We, hopefully, can do something about that because it’s not a positive force, it’s a negative force.”
Trump also said he’s confident Washington and Moscow can improve relations and said a friendly and productive relationship is “a good thing.”
Trump’s motorcade arrived just before 7 a.m. EDT at the beige neoclassical palace on the Esplanadi near Market Square in the Finnish capital.
Hundreds of people in the vicinity of the palace turned out to watch and take photos of the motorcade, and some held signs and flags. A Finnish newspaper placed billboards around Helsinki with various messages for Trump — like “Make Human Rights Great Again” and “Mr. President, welcome to the land of free press.”
A second, expanded bilateral meeting with presidential aides followed the first session. The joint news conference ended the meetings.
After speaking to reporters, Trump and first lady Melania Trump were set to leave the palace for the airport for their return trip to Washington, D.C. They are scheduled to return at Andrews Air Force Base around 8:45 p.m. EDT and the White House 15 minutes later.
Monday’s is the first U.S.-Russian summit in eight years. The last, between former Presidents Barack Obama and Dmitry Medvedev, was held in Prague, Czech Republic, on April 8, 2010.