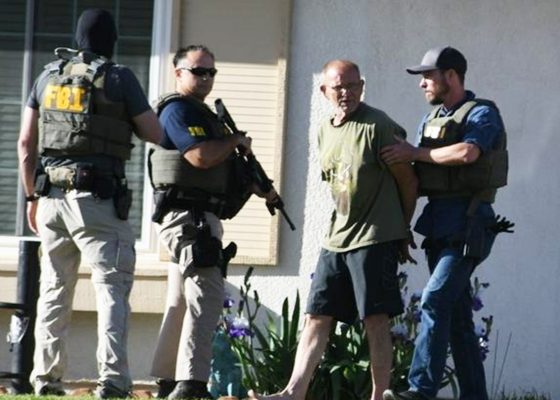 By James Queally and Paloma Esquivel

An FBI spokeswoman confirmed agents were executing federal search warrants in the city on Tuesday but declined to comment further because the affidavits in support of the warrants are under seal.

Kerr was seen being removed from his home in handcuffs Tuesday morning, according to the Victorville Daily Press. The official, however, told The Times that Kerr had not been arrested.

In a written statement, city spokesman Michael Stevens said the city was unaware of the nature of the FBI investigation but was “prepared to cooperate with any investigation being conducted.”

Because of the search warrants, City Hall will be closed Tuesday but should reopen Wednesday, Stevens said.

“The City Council wants to assure the public that the city will continue to focus its efforts on providing the services that residents and businesses expect,” Stevens said.

The agencies involved in Tuesday’s searches included the FBI, the Internal Revenue Service’s criminal investigation division and the San Bernardino County district attorney’s office, according to Thom Mrozek, a spokesman for the U.S. attorney’s office in Los Angeles. The searches were executed at Adelanto City Hall, a residence on Melody Place and an address on Adelanto Road, Mrozek said.

An official told The Times that the residence is Kerr’s home. The official was not authorized to discuss the case and spoke on condition of anonymity.

The Adelanto Road address belongs to a marijuana dispensary called the Jet Room, according to the dispensary’s website. The website boasts that the dispensary planned to ensure at least half of its employees would be Adelanto residents.

Mrozek said he did not anticipate any arrests taking place or charges being filed Tuesday but declined to comment about the nature of the investigation because the warrants are sealed.

The existence of a probe into Adelanto corruption allegations first came to light in November, when Mayor Pro Tem Jermaine Wright was accused of accepting bribes and asking an undercover FBI agent to burn down his restaurant so he could collect insurance payouts.

Wright, 41, allegedly met with an undercover FBI agent posing as a marijuana cultivator last year and agreed to vote, in exchange for $20,000, in favor of a measure expanding the parts of Adelanto where marijuana could be grown, according to a criminal complaint.

Money did not change hands, but Wright did agree to accept the bribe, according to the complaint.

After the council vote, Wright also agreed to accept a $15,000 bribe in exchange for helping “fast-track” the undercover agent’s proposal for a marijuana business, prosecutors said.

When confronted by FBI agents during a search of the restaurant in October 2017, Wright admitted to the arson plot and agreed to cooperate with the FBI’s continuing investigation into Adelanto corruption, prosecutors said.

Kerr was accused of sexual harassment late last year, but an independent investigator cleared the mayor of wrongdoing in February. Citing confidentiality laws, the city did not release or discuss the investigator’s findings.